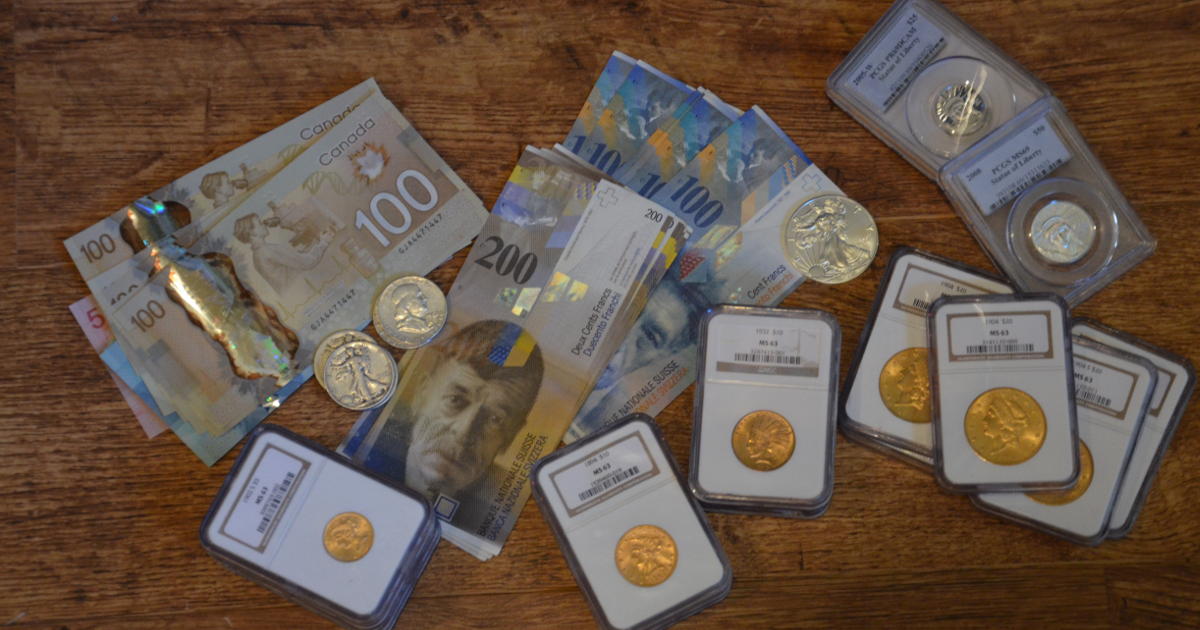 I’ve always encouraged my blog readers and consulting clients to diversify their investments to include precious metals. While the markets have displayed their vagaries and suffered from COMEX price manipulation, the general trend for silver, gold, and platinum has been upward at a faster rate than the rate of consumer price inflation. And now, with inflation surging again, it is time that I remind SurvivalBlog readers of some fundamentals. Most importantly, we need to recognize that all fiat currencies are doomed, in the long term. The Almighty U.S. Dollar is no exception to this. Even the Swiss Franc (a good short-term hedge) is also a fiat currency.

You need some fire insurance on both the Dollar and stocks. Someday, the purchasing power of the Dollar will be destroyed by inflation that goes to double digits, and then triple digits. This may not be in the 2020s, but it is just about inevitable. Why? Because I doubt that the U.S. Congress is going to suddenly have a change of heart and stop over-spending. It is what they’ve always done. So your only real safety will be in investing in tangibles. For example: productive farm and ranch land, guns, ammunition, and precious metals. I summed that up in this article: JWR’s 20 “S” Strategy for Tangible Investments.

When hedging into precious metals, I’ve always preferred silver. It is best for barter, and more likely to double in price than gold. It is also currently undervalued to gold. (See my oft-repeated mentions of the silver-to-gold price ratio, and my suggestions on ratio trading.)

Back in November of 2005, I wrote this article: The Precious Metals Bull Continues His Charge. In it, I included this:

I have a good friend with whom I chat on the phone quite regularly. I have been bugging him to hedge into metals for the past three years. When the spot price was $4.35 an ounce with the dealer’s commission a 100-ounce Engelhard bar was about $500. At that time, I suggested that my friend buy at least buy one or two $1,000 face value bags of pre-1965 “junk” silver coinage–just in case. He waffled. Then, when silver was $4.80 an ounce, I was practically begging him to buy.  Even though he was sitting on substantial dollar-denominated liquid assets, he kept coming up with reasons to not buy. Once silver passed $5 per ounce, he claimed that he was waiting for “the next time that it dips below $5.” Then that dip came, and I pointed it out, and he came up with yet another excuse. This went on and on.  Once silver passed $6 an ounce, he claimed “I’ve missed the boat.”  I tried explaining to him that silver was heading well past $12 an ounce in this bull market, but he wouldn’t budge. I finally gave up trying to convince him. Some deer just can’t resist standing and watching those approaching headlights…

The recent spike in gold and silver prices is interesting, because it came at a time when the dollar was strengthening versus the Euro. In contrast, the previous recent rallies occurred when the dollar was losing ground to the Euro. Similarly, gold has traditionally gone up when the price of oil was climbing. But wait a minute–the price of oil is slumping. So why is gold galloping? Something has changed. Perhaps there has been a collective realization that all paper currencies are risky, and that it is therefore time to hedge. The only problem is that in the grand scheme of things is that there just are not a lot of metals to buy. The COMEX is a relatively small market. That is why it tends to be volatile–just a few investors making significant trades can move the market dramatically. If just 10% of  America’s stock and bond investors decided to hedge a fraction of their portfolios into metals, they could buy the entire COMEX inventory, several times over.

I’ve been surprised to see that there has not yet been any significant profit-taking, which is the norm, following COMEX price spikes. If there is no pullback–just a staircase climb upward, –this could be a portent of a paradigm shift. As I’m writing this, (Friday evening), silver is at $8.03/oz., and gold is at $485.20/oz. If gold breaks out above $500 per ounce, watch out! It could be a precursor of a full-scale dollar panic. For those of you that have read this blog regularly, you know the larger implications–at the societal level. Be ready.

Most Americans are familiar with the fact that the U.S. Mint formerly produced 90% silver coins, for circulation. So in the event of a Dollar Panic, while they may not know the details, folks will be eager to learn.

I estimate that nearly half of the US population is familiar with the fact that dimes, quarters, half dollars minted before 1965 are silver. (Although most folks don’t know that they are 90% silver, with base metals added. for the hardness required for the rigors of circulation as pocket change.) Most of these same folks know to look for copper showing on the rims of later (post-1964) debased coins, to distinguish them from the earlier, genuine article. In the event of a monetary collapse, there will surely be a rapid education for the rest of the populace. The beauty of free-market economics is that prices very quickly reach equilibrium. I anticipate that within just a few weeks, new prices denominated in pre-1965 silver coinage will be set for most consumer products, and a daily trading ratio of silver coin-to paper currency will be pegged. (No doubt with a steadily-declining value for the fiat paper currency.) Have faith: The marketplace will quickly adjust, and people will quickly adapt to using silver coinage and practical tangibles in barter. (As I’ve written before, in the early stages of an economic collapse, ballistic wampum, i.e. common-caliber ammunition will likely be even more sought-after than silver.)

On a related note: Few Americans are familiar with the 40% silver content half dollars minted between 1965 and 1970, so I do not recommend buying any of those for barter.

The Trend is Still Your Friend

The long-term trend for the U.S. Dollar is down, and the trend for silver is up. Government over-spending and increases in the money supply have assured that these trends will continue.  I still recommend gradually diversifying into silver. The price of silver can be volatile on a day-to-day basis, but “the trend is your friend.” You can try to buy on days when the spot price of silver dips, but a long-term monthly buying plan works even better. This is the equivalent of Dollar Cost Averaging in buying stocks.  If you consistently salt away at least 5% of your income in silver, month after month, then you’ll have a winning strategy and an assured safe retirement — regardless of what happens to the U.S.Dollar, or to the equities markets. They can crash and burn, but you will still have your tangible wealth.

Silver By The Bag

Earlier this year, I wrote:

I am often asked in e-mails about gold and silver coins and their value, both in the present day and their eventual worth (post-TEOTWAWKI) for barter purposes.

The basic unit of measure for most of us that are in preparedness circles is the $1,000 face value bag of circulated U.S. silver coinage, minted in or before 1964. (Some folks mistakenly call these coins “Pre-’64”, but properly they should be termed “Pre-’65.”)

1964 was the last year that 90% silver coins were minted for circulation in the U.S. All of the dimes and quarters minted from 1965 onward are “clad” copper pieces–a sandwiched token that is mainly copper and merely flashed with silver. The government has the audacity to still refer to the new currency as “money” and “dollars”, when they are nothing of the sort. Just look at the edge of one of the modern “coins” in your pocket. We’ve been robbed, ladies and gents!

The 90% silver dimes and quarters coins were almost all gleaned out of circulation by about 1967. Finding one these in your pocket change these days is a rarity and cause for celebration. (Usually inadvertently in circulation because a child raided the wrong piggy bank and spent the coins in ignorance.) The Kennedy half dollar coin continued to be minted with just 40% silver content from 1965 to 1970. After that, Uncle Sugar dropped all pretense of issuing real coinage for circulation.

A $1,000 silver bag weighs about 55 pounds and is roughly the size of a bowling ball. The coins used for this purpose are typically well-worn and hence have little or no numismatic (collector’s) value. Hence, they are often derisively called “junk silver” bags by coin dealers and collectors. Dimes, quarters, and half dollars all have the same ratio of silver content per dollar of face value. Silver dollars have a bit more silver content per dollar, so they sell at a premium. (See below.) Because of the weight of silver bags insured shipping is problematic. So it is advisable to buy locally, but definitely shop around for the best price! If you don’t have any nearby coins shop and don’t mind paying for the freight, contact the folks at Gainesville Coins, APMEX, or Swiss America Trading. All three of them are very reputable companies.

Where To Store Your Metals

I often hear the refrain: “But where can I safely store precious metals?” In May of 2007, I wrote:

There is no substitute for personally holding your precious metals in tangible form. Don’t trust any individual outside of your immediate family or any institution to hold your precious metals for you–not even in your bank safe deposit box. History has shown again and again that A.) People and institutions can’t be trusted and B.) Governments get grabby when they perceive a monetary crisis in the offing. It makes no sense to grant special trust and confidence to a third party. Store your precious metals at home. Yes, I realize that home storage comes with its own set of risks. But at least the responsibility will be yours alone. And yes, I realize that home invasion robberies are on the increase. So there is now a very small statistical chance that you will someday be held at gunpoint and forced to “hand over” your valuables. For this reason, I recommend that you leave a fraction of your precious metals in your home vault. Put all of the rest in a well-hidden, well-sealed waterproof wall, floor, or underground cache.

I stand by that recommendation.

Taking My Own Advice

You may have noticed that I’ve implemented pre-1965 silver coin pricing at my mailorder antique gun business. So now, at Elk Creek Company you can take your choice of paying in Pre’65 silver or paying in Federal Reserve Notes (FRNs) — by check or postal money order. The FRN prices are at a multiplier, that changes frequently. Most recently, it has been at 21 times the silver face value.

And yes, it is still a good time to buy silver! – JWR