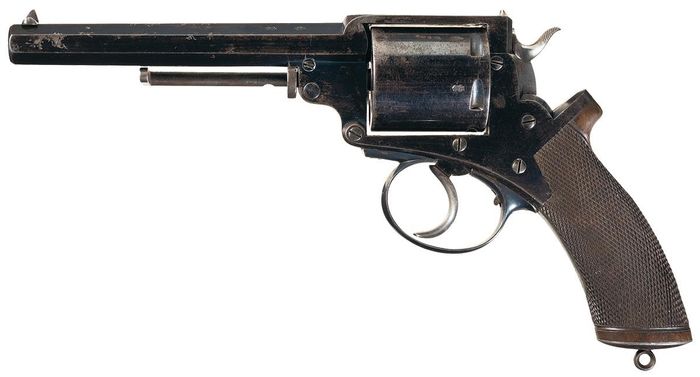 Today is the anniversary of the founding of the London Armoury Company, in 1851. It was founded by Robert Adams (1810–1870). He patented the first successful double-action revolver in 1851. His revolvers were used during the Crimean War, the Indian Mutiny, the U.S. Civil War, and the Anglo-Zulu War.

August 22nd, 1992 was the second day of the Incident at Ruby Ridge. FBI sharpshooter Lon Horiuchi wounded Randy Weaver and Kevin Harris, and murdered Weaver’s wife, Vicki. It should be noted that in 1994, after being acquitted by a federal court, Weaver filed a federal civil rights case against the FBI and U.S. marshals stemming from the siege. In 1995 the government settled Weaver’s case for $3.1 million. It is commonly thought that had the Weaver family stayed with the trial, the award would have been the full $200 million. In true FBI style, Lon Horiuchi was not prosecuted by the Federal government. When Idaho brought manslaughter charges against him, the trial was moved to federal court and dismissed. Horiuchi has also been accused of firing unauthorized shots at the Waco siege as well.

A Special Request: Do you have some .33 Winchester brass that you can spare?  I’m looking to buy 20 to 60 once-fired pieces of this scarce brass.  Hopefully, yours is actually marked “.33 WIN” and it is priced below  $1.50 per piece. It would be great to have that to include it as a bonus for whoever buys the Model 1886 in .33 Winchester that I have in inventory. Thanks! – JWR

Today we present another entry for Round 96 of the SurvivalBlog non-fiction writing contest. The prizes for this round include:

Round 96 ends on September 30th, so get busy writing and e-mail us your entry. Remember that there is a 1,500-word minimum, and that articles on practical “how-to” skills for survival have an advantage in the judging.