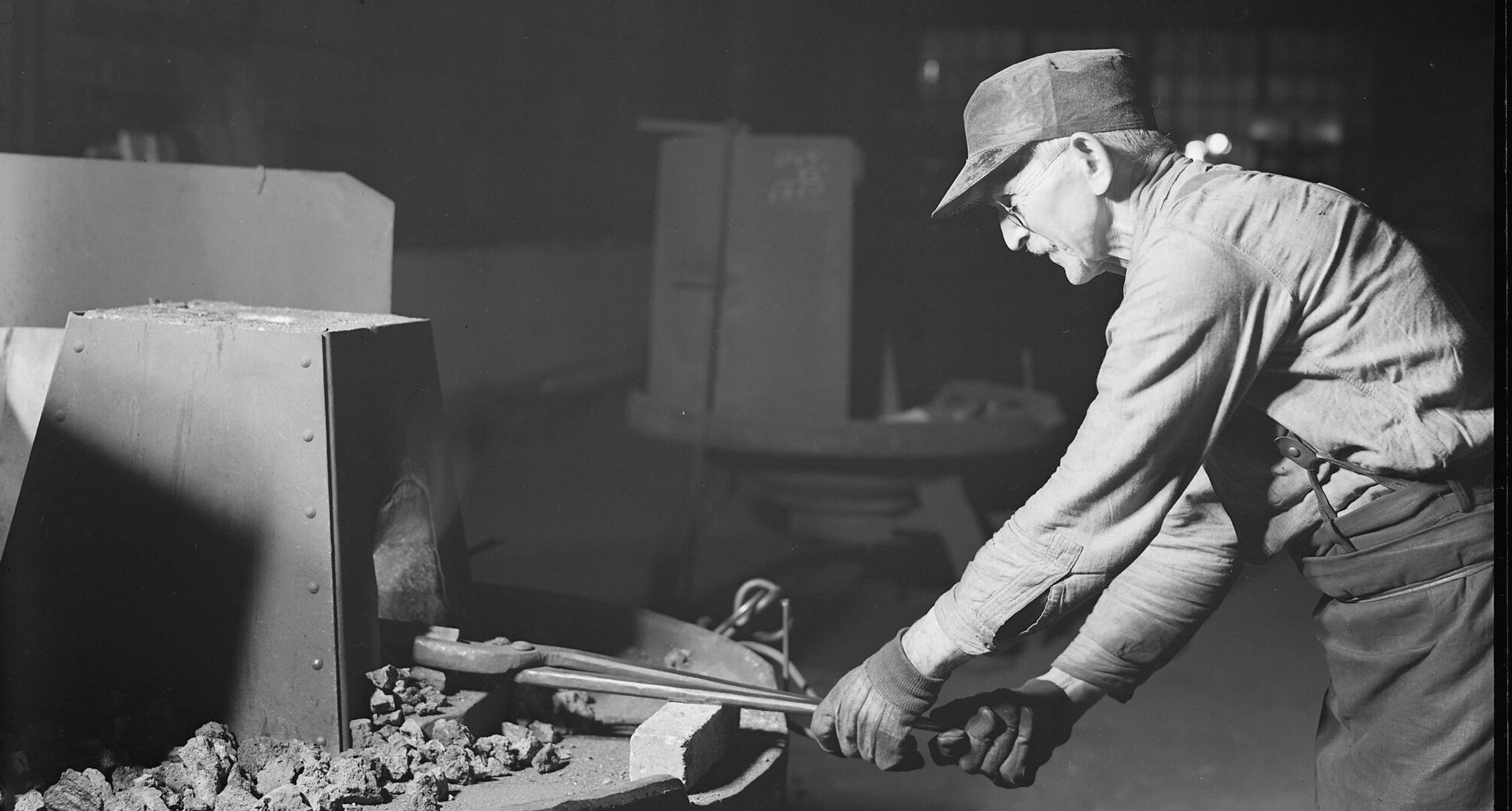 Another way to do this starts by clamping the file by its tang upright in a metal vise and annealing it with a torch. If you slowly and evenly heat the file to the critical temperature with an oxy-acetylene torch, you can slowly reduce the heat over a period of ten minutes or so by moving the torch away from the file to reduce the heat until the steel does not glow and then let the steel cool in still air. This will not soften the steel as uniformly as the slower methods but will soften it enough to allow it to be more easily worked. The surface oxidization or scale formed during heating should be removed by wire brushing before proceeding. Vise-grips may be used to hold the file during the annealing, heating, and quenching steps. In the old days blacksmiths would make or modify a set of tongs to hold a specific shape being worked.

The softened file may now be hacksawed, filed, milled, ground, forged, or otherwise shaped into a knife blade of your design. At some point during this process grind off or otherwise remove all of the file’s teeth and the steel just under the teeth to prevent any possible stress risers later. If hard spots are encountered; repeat the annealing step. Finish shaping the knife blade fully now while the steel is easy to work.

After the soft blade is shaped it must be hardened again and then tempered. To do this with an oxy-acetylene torch use a neutral flame and play the flame along the area of the blade that will become the cutting edge. You are heating the blade about a quarter inch away from the knife’s edge and allowing the heat and color to travel to the edge of the blade. The blue inner flame cone of the torch should not touch the blade at any time, only the secondary outer cone. The heat will travel quickly to the thinner part of the knife that will become the cutting edge and bring it to full temperature.

Turn the blade side to side frequently and alternately heat the edge area on each side of the blade to a uniform, bright cherry red. A band at least 1/4″ wide along the cutting edge should he at the critical temperature. This will become the hardest part of the blade. A band of hard steel this width gives plenty of cutting-edge support and allows the knife to be sharpened many times.

Do not let the edge of the blade get overheated during this step. A magnet should not be attracted to the red-hot area. When the area of the blade that will become the cutting edge is evenly heated, maintain the existing critical temperature for a minute or two, then very quickly quench the blade.

The quenching medium used for suddenly cooling and thereby hardening the red-hot steel will be the same light oil. Large coffee cans make good quenching tanks for occasional use. A length of steel pipe welded to a steel base plate is better. Cut the bottom out of one can and stack it on top of a second can to form a tall tank. Use duct tape to join the cans and fill with oil up to about 1″ from the top. Place the tank assembly inside a shallow container, such as a cake pan or better yet a steel automotive oil change pan. The pan will serve to catch any oil that might overflow the tank during the quench. Be prepared should hot burning oil spill out of the tank assembly and the shallow container for some reason during the quench. It does happen.

Heat the oil to around 130 degrees F prior to quenching the steel by stirring with a heated steel rod until the oil is at temperature. A cooking thermometer works well for this. When heating or quenching steel, always wear proper protective clothing and eye protection. Be aware that the oil will often flame up as the blade is quenched. The flame usually dies out as the blade is totally immersed in the quenching bath. If the flame does not die out quickly, place a metal plate over the top of the quenching tank to smother it. Keep a fire extinguisher nearby and do not work around other flammable substances.

Keep the blade in the quenching hath for one minute past the point when it stops vibrating from the shock of the rapid cooling. Remove the blade and quickly clean the scale from it with a wire brush, steel wool, or fine sandpaper. Test the still warm blade for hardness by trying to cut the edge with a file. The file should skip over the cutting edge without biting into the steel, indicating complete hardening.

Before the blade can cool to room temperature, wipe off any excess oil and put the blade into a kitchen oven that has been preheated to 450°F. Leave the blade in the oven for two hours to temper the steel. Higher tempering temperatures will result in a slightly softer but tougher blade. This tempering reduces the hardness and brittleness of the knife blade so it has some flexibility and can be more easily sharpened.

As the cutting edge of the blade was heated to the critical temperature, the area above the edge area probably attained something less than the critical temperature. When the blade was quenched, this area did not become fully hardened and a section of it has effectively become a spring. Areas further away from the hardening heat are softer still. This is a good thing and adds to the blade’s toughness.

If the entire knife blade, perhaps a small blade, had become red-hot during heating, the hardness in the areas away from the cutting edge can be reduced. Place the cutting edge in a pan of water up to about half the knife blade height to protect its hardness and heat the other areas of the blade away from the edge with a propane torch until they turn a blue color. Some knife makers do this to every blade to insure consistency of blade performance. Do not let the blue color run into the cutting edge of the blade or it will soften that area also. Check that the areas of the blade so softened can be easily cut with a file.

A knife hardened and tempered in this fashion will have a relatively hard cutting edge backed by progressively softer and tougher steel. Knifemakers refer to this as selective tempering. Such a knife, correctly designed with proper blade geometry and handle construction, can be incredibly tough and take tremendous abuse. It will tend to flex and then bend without breaking under forces that would snap a uniformly hard knife blade of similar design. These attributes make the knife excellent for general cutting duty. It can also be depended on when it must be used to dig, puncture, build a shelter, pry, hammer, or be otherwise abused.

Tempering is always a compromise. Some blades are uniformly hardened quite hard. They will hold an edge but can be somewhat brittle. Most factory and custom knives made from complex stainless steels are heat treated this way. If a knife is not abused, this is perfectly acceptable. Some blades are uniformly tempered to a lower, spring-like hardness which gives toughness, flexibility, and shock resistance at the expense of edge hardness. Examples would be military bayonets and machetes.

Due to their small size, it may be difficult to soften the hack of small knife blades found in shop knives or chip carving knives without adversely affecting the temper of the cutting edge. This is not a problem as long as they will not be subjected to the abuse a general duty knife might experience. Do, however, soften the handle tang area up to the beginning of the cutting edge to decrease the chance of the blade snapping off at the blade-and-handle junction.

There are some tradeoffs to be aware of when using high carbon steel blades. Knives built from these steels discolor with time and will rust in a heartbeat. Cleaning and a light coat of paste wax or oil after use will go a long way toward preserving your knives. Do not store them in a leather sheath or moist environment or they will quickly rust badly.

All that is left is the final assembly. You will need to polish the blade, install the finger guard if used, install the handle, and sharpen the knife. If a finger guard is used it should be pinned and soldered or epoxied in place. Wrap the blade in a wet cloth to keep it cool if you solder the guard. Epoxy and bolt, pin, or rivet the handle to the blade and shape the handle. The epoxy and solder certainly act as adhesives, but their main use is to keep moisture out from under the handle and guard. This will prevent hidden rust and corrosion.

Remember, even an unfinished, unhardened, unsharpened knife blade can severely cut and stab you, so be careful. You may wish to heavily tape the blade area when working on the handle or finger guard. Duct tape works well for this purpose. Heavy gloves offer some protection for the fingers. Many knifemakers wear chain mail shop aprons when grinding or buffing knives. Sharpen the knife as the last step.

The methods blacksmiths and many knife makers use to make a knife, chisel, or other small cutting tools from new or recycled material are all based on well understood metallurgical principles. A few books about blacksmithing and knife making that include sections on theory and practice of heat-treating steel would be a good investment. This understanding expands your capabilities significantly.