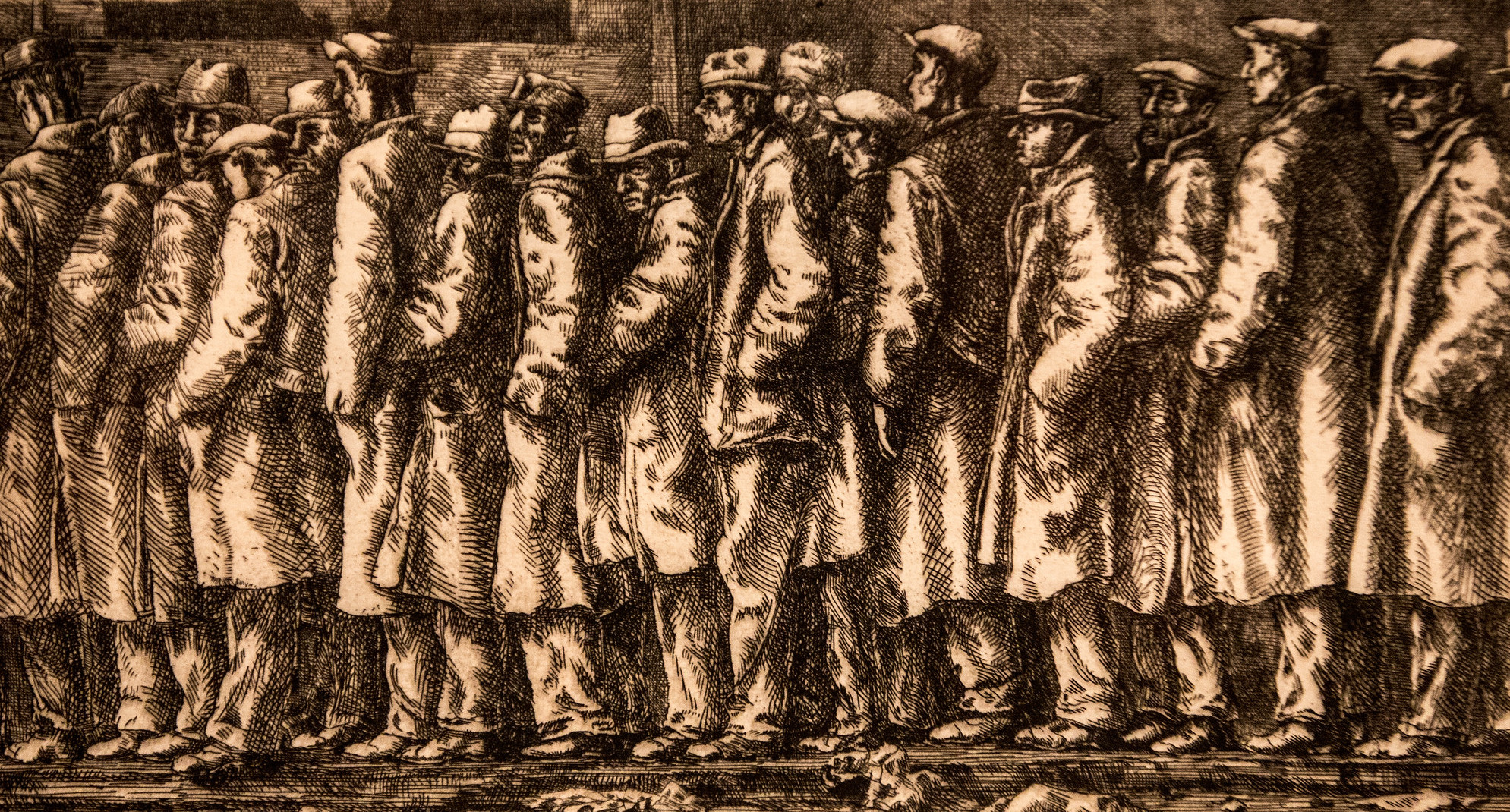 Searching for jobs can be done in multiple ways. If you’ve filed for state benefits, you’ve likely been enrolled in a state employer search database. Make use of this, as the employers linked to the state are likely to be hiring constantly and not too picky. If you just need some money coming in, you’ll be hired soon. If you want to wait for a higher quality job, begin searching online. Local listings on Craigslist, Indeed, Monster, and other search engines are a reasonable starting point. I’ve discovered, however, that the oldest technique is still the best:

Apply in person! I’ve had many immediate interviews this way, and it has led to most of the jobs I’ve had since I was in high school. In-person applications make you stand out from the rest. Dress for the job you want, shake hands, make eye contact, and appear honest and positive. Your first impression is the best one. Even if you don’t get the job, save the contact information in a file. If unemployment appears in your life in the future, you will have a file of leads that you can start with immediately. In-person contacts, even unsuccessful ones, are never wasted time! If an employer seems like they are interested, keep knocking on that door in person until it opens. Be polite but persistent both in person and on the phone. Show your interest and determination, and after a month an undecided employer may give you the job you’re looking for. Assume anything but a firm “No” is a “Yes” waiting on you to make it happen!

Consider making a career change. If your field of work isn’t taking you where you want to go, figure out how to update your credentials and shift to something else. I used unemployment benefits to pay my bills while I went back to school for a month to get my Commercial Driver’s License – something I’d wanted to do for a long time but never had time for. Not only did going to school enhance my credentials, attending an accredited program exempted me from certain work search requirements while I was unemployed. It gave me time to find the job I really wanted, rather than taking something immediately that was in my field but less desirable. If you are considering going back to school, avoid debt. Make sure that what you’re doing makes sense and will lead you to a better career than what you currently have. Check that jobs exist in your desired field. Make sure that any program you attend has a way of connecting you to potential employers. The last thing you want is to spend time attending a program, spend the money you’ve got, and still end up struggling to find work.

While you are unemployed, use whatever time you aren’t searching for work as time available to improve your life. Start with your finances. Since money is an issue, you will never be better motivated to make changes than at this time. Analyze your savings, your bills, and your investments. Cut waste! If you have property, materials, and tools, use time wisely to accomplish projects you’ve been putting off. One irony of life that I’ve noticed is that while employed, I constantly wish for vacation time and days off to accomplish projects at my house. When unemployment arrives, I constantly wish to go back to work. Instead of wishing for what you don’t have, take advantage of what you’ve been given. Make progress!

If you have tools and a means of production, you will have plenty of maintenance work and projects to do. I had opportunities to make money almost immediately by doing home repairs and fixing people’s vehicles. I could have easily paid my monthly bills that way. I also have a garden. By having a garden, wild resources, and animals, I have a food supply that is easily replenished. My first period of unemployment was during the summer, and I was able to eat mostly from the outdoors. I didn’t even dent my stored food, and I purchased nothing. My second period of unemployment was during the fall and winter, so I used some of what I had stored. Even then, I was able to avoid making purchases and avoid using my savings.

Unemployment is miserable and takes a while, so you’ve got to find a way to cope with how you are feeling. Even if you spend 50 hours a week searching for work and meeting contacts, you still have evenings and weekends to fill. Even if you spend time at home doing useful projects, your energy is limited and so are your resources. And remember, you have limited money to entertain yourself, so “retail therapy” won’t work. Getting fired or laid off is very demoralizing. You feel helpless, trapped, and if you live by yourself like I do, you feel lonely. If you’re growing a garden and working on projects, you’ll feel overworked in spite of not going to work. It wears you out! Some people end up needing therapy for mental issues while unemployed, or even resort to committing suicide. Be proactive, and take your mental state very seriously!

For me, my church gave me an answer to unemployment-related depression. During this time, I attended church more frequently. I spent time reading Scripture and praying. Through the church, I found other people who were going through similar struggles. Since I have a bunch of tools, I found ways to volunteer my time doing basic home and vehicle repairs for people who needed it. I could have sold my services, but since God blessed me with savings and government benefits, I volunteered those services instead. What I found was amazing – giving even in a time of need was incredibly uplifting. I got to spend time with good people, and get out of my house. Helping others gave me victory over those feelings of helplessness and loneliness. It gave me perspective.

My situation wasn’t pleasant, but I was still blessed in ways I had taken for granted. Even when the solution to your own problems isn’t immediately available, helping others solve their problems gives you back the power in your life. It shames Satan, and shows God your thankfulness and trust in Him. You may not end your unemployment process this way, but you’ll have “peace that passes all understanding” in the middle of it.

Once you’ve gone back to work, don’t relax just yet. This job could disappear as easily as the last one. I found that out when the construction job I’d taken laid me off after only three months. It was surprising and discouraging to be unemployed twice in one year. While it may be tough to think about, prepare for the next round of unemployment as soon as you have a new job. Don’t get blindsided! Start by regaining lost savings as soon as possible. Even though you have money coming in, you’ll have to remain at your unemployment spending levels for a while. You may even have adopted a new permanent way of living life and managing money. If you have a family, you’ll have to explain your thought process to them. People expect that when a situation resolves, life will immediately return to “normal.” Normal may not return for a while. It may never return. Perhaps it shouldn’t! If you’ve learned something through unemployment, don’t discard it as soon as you get another job.

Even though you are focused on success at your new job, spend time preparing for the next job. Stay organized. Update your resume, again. Keep the list of contacts you made during your unemployment process, and save it in a file. Keep all the business cards that people gave you when you made in-person visits, and attach them to whatever notes you made about your appointments and interviews at that location. Those business cards contain valuable information such as phone numbers, e-mails and addresses. If you become unemployed again in the near future, you can revisit people who might remember you. Keeping their card is a physical way of demonstrating that you valued their time and the connection that you made. What was “No” last month could be “Yes” the next time around.

“No plan survives contact with the enemy.” Even if you’ve thoroughly prepared for unemployment and have resources, you will learn something through the experience. Stress will, by itself, cause your mind to function differently. While I learned a few things about preparedness and the employment process in the current era, I gained even more insight into myself.

First, I was reminded that life will kick you when you are down. I was unemployed twice in one year. I was relieved when the first period ended and I found a job, only to be laid off three months later. I hadn’t recovered, and the surprise was bitter. Frustration happens when you expect one thing and you receive something else. I had expected to recover my lost money and momentum, and instead received another setback. Expect trouble! A little paranoia is sometimes a healthy thing, so stay alert for the next problem.

Since I live alone, I tend to be self-sufficient. The stress of unemployment revealed the fragile nature of a single man’s connection to his family, friends, and the outside world. I discovered that the church was a lifeline. While I didn’t need economic support, increasing human interaction was necessary for mental health. Doing acts of service gave me a perspective on the lives of others, and opened my eyes to avenues of side income that I could rely on in the future. More than anything, going through unemployment increased my reliance on God. All good things are blessings that come from Him. When we keep our eyes focused on the One who gives the blessings rather than the blessings themselves, that relationship can sustain us when other things fail.

Finally, timing affects all sorts of aspects of the unemployment process. I’ve stressed the importance of preparing beforehand, and reacting appropriately to unemployment as soon as it happens. But some things come down to luck, and some things come down to somebody else’s timing. When you’re unemployed, you want an immediate resolution to a problem that will take weeks or months. Don’t let your hopes and expectations blind you to this timing. Expect that often, your deliverance from the situation will take place at the last minute.

One of the elders at my church gave me this bit of advice when I was stressed out about waiting: “God is always on time. Never late, and seldom early. The people of Israel had to see the Egyptian army closing in on them before God parted the Red Sea.” That advice gave me hope, and adjusted my perspective! Expect that the end will come, but also expect the greatest stress right before your victory. Your preparedness and God’s deliverance will bring results, but stay focused on the fact that you’re preparing for a process, rather than a single event.