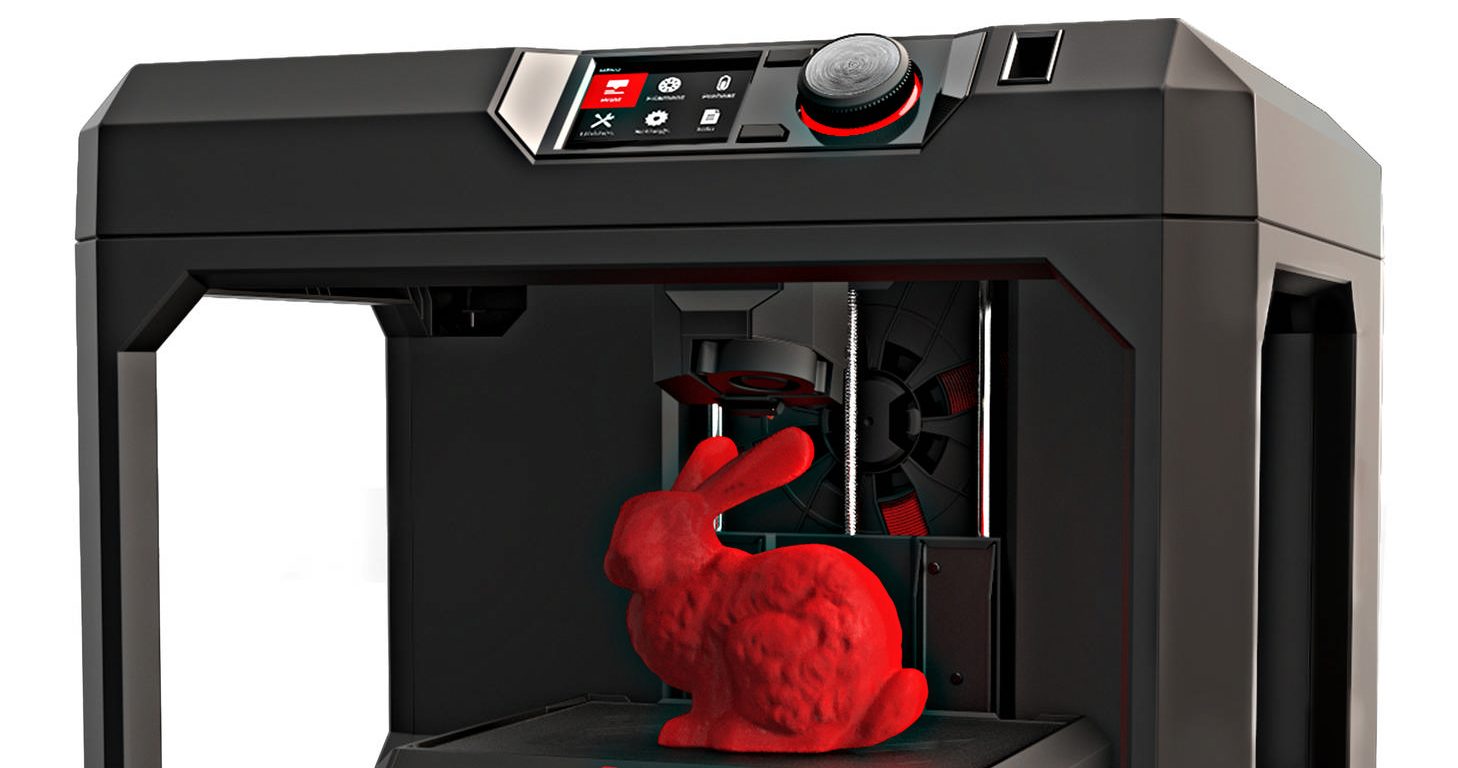 Editor’s Introductory Proviso: The following article is intended for educational purposes only. It is not legal advice. State and local laws vary widely, so be sure to consult them before you buy, print, or build!

Now don’t get me wrong, I’m not a Marxist, I just love the confused look that I get from my more “progressive” friends when I quote a little Marx at ’em, as they know I tend toward the libertarian perspective, but at least when it comes to the means of production, perhaps we can find some common ground. To wit, 3D Printing!

I admit, my concept of 3D printing was pretty hazy up until about a year ago, when a friend introduced me. I had imagined it to be strictly the province of movies and high tech prototyping labs and industry. I was wrong. At the consumer level, the price and quality of 3D printers has evolved to a level where even a cheapskate Luddite like me can afford a printer and, just as important, is capable of harnessing and possessing the means of production for less than $300 ready to go. This article is meant to give you the same introduction I benefited from, and the background and resources to investigate further whether this capability is something you can benefit from (of course it is!)

Production of what you may ask? Darn near anything you can imagine! During these days of pandemic and the associated disruption to supply chains, the ability to get desperately needed items from factories across the country and across the world has been demonstrated as fragile indeed. Hospitals and companies have turned to 3D printers to produce their needed components for ventilator circuit connectors, lab testing materials, PPE, and more.

On the individual level, I have for example printed sheaves for an old pulley system that would have cost $50-60 dollars to have bought from a scrap dealer online and shipped to me, when perhaps 25 cents worth of filament and an hour or so on the printer gave me a functional replacement sheave and several spares as well. In order to build an enclosure for the netting my wife puts around the strawberries to keep birds out, I printed a series of connector brackets that hold half-inch conduit piping together at the joints. To demonstrate ratios of mass to surface area my kid’s printed gliders they can launch with rubber bands and measure their flight times. Do you need a bracket of particular size and shape to hold something in an odd spot, temporarily or permanently? Print the bracket to your own spec!

Back during the face mask shortage this spring, I was able to print face masks that could be screwed in series to allow various levels of filtration. I had long ago lost the drain plug for an old Igloo brand cooler…I had been sticking cotton balls wrapped in plastic cling wrap into the drain hole to try and prevent leakage and delay melting, but it was always a poor substitute. 10 cents of plastic and an hour on the printer, and I have a drain plug that works as well as brand new. Battery boxes, socket wrench organizers, hose thread adapters, and one of my wife’s favorites, a coupler that allows us to refill small, travel-sized toothpaste tubes from larger (more economical) toothpaste tubes. These are but the barest fraction of useful objects you can produce in your home…but the real excitement is yet to come.

Perhaps global supply chains stay disrupted…or maybe they don’t…could some equal or worse disruption ever occur again? Readers of this blog already know and are preparing for the possible ramifications of such events. But perhaps it isn’t supply chains that cause a future shortage of needful things…perhaps it is legislation. You see, beyond garden brackets and toothpaste couplers, there is much more that can be produced, and that much more includes things like 33-round Glock 9mm magazines. It includes things like pistol stabilizing braces. It even includes things like lower receivers for AR-pattern rifles and Glock or Smith & Wesson-type pistols. And much, much more.

This is far, far more and different than the Defense Distributed Liberator you may have heard about some years ago. That was a more or less functional single-shot .380 pistol made entirely from 3D printed parts. It was of very questionable utility, and aside from causing a ruckus in courtrooms and in the minds of gun-fearing activists, made little difference to practical people. But his is something different. This is printing the receiver only, and finishing the build of the firearm with easily-purchased components, like the barrel, bolt, trigger, etc. In the eyes of the law (US law anyway) the receiver is “the gun”. So if you have (or print) a receiver, even if it has no moving parts and can’t fire a projectile and is made of plastic, you have a gun. Now the other bits and pieces that turn your receiver into a functional device? Those can be purchased on the open market without requiring an FFL to ship to or a waiting period, or purchase limits, or a 4473 form, or any other Federal requirement.

Tutorials on how to build an AR-pattern rifle or Glock pattern pistol from parts are widely available and beyond the scope of this article. (See the SurvivalBlog archives.) What I am drawing your attention to is the ability to produce, without a paper trail or the permission and say-so of any regulatory authority, the component that is most subject to restriction in the United States.

Now a word about the law here: Though I am not a lawyer, I have spent considerable amounts of time studying this subject and I have consulted with my lawyer, who specializes in this area. But he is not YOUR lawyer. Nor am I YOUR lawyer, so take this for background education purposes only, and with special emphasis on Federal law. State laws can vary considerably, and may be much more restrictive than Federal law. Under federal law, there is nothing wrong with a person building their own firearm. You can build as many as you want without an FFL, so long as they are intended for your own personal use. You can sell or give them away, but that cannot be your intent when you build them. Intent of course is part of the case they would build against you if ever you were prosecuted. But for personal use, you can build to your heart’s content.

You may add a serial number if you wish, but are not obliged to do so, as long as you don’t transfer the firearm to anyone, ever. Local law enforcement may not know this however, and it may be difficult to say that you will NEVER transfer it ever, so perhaps it would be prudent to include a serial number of your own choosing, say 7-4-1776 for example. You are the manufacturer, you get to choose, and no, you don’t have to fill out any paperwork or declare to anyone that you made it.

When it comes to all the other parts and pieces, the barrel, trigger assembly, bolt, etc, these are widely available online and elsewhere; as I mentioned Glock and AR pattern firearms have a huge industry supporting their OEM and aftermarket parts and accessories and cobbling one together is not too complicated an affair. These parts can be bought legally without any paper trail or regulatory permissions. Now, if you assemble these components, or even have these components together in “constructive possession” in the eyes of the law, and if that law prohibits the type of firearm you might build, then you are in violation of the law.

If the gobernmint of your state says you can’t have an AR-15, then you can’t (legally) have an AR-15, even if you can easily and legally produce and obtain the parts for it. Putting those pieces together (or constructive possession thereof) would be illegal if possession of the finished gun would be illegal. If, however, possession is not illegal but the SALE of such firearms is illegal, well then no worries, you didn’t BUY the gun, you made it! (Again, check with a lawyer in your state about this, we are talking overview here only, chiefly of Federal law.)

And obviously, if you are a “prohibited person” (felon, foreign national, adjudicated mentally incompetent, user of illegal narcotics, etc), then you are still prohibited from making your own receiver, since it is possession that is prohibited in that case.

A word about magazines. We have witnessed in the recent past a variety of restrictions on magazines holding more than 10 rounds, their sale and in a few cases even their very possession. If one were faced with such a prohibition and shortage and needed in fact to have the means of loading more than 10 rounds at a time into their chosen firearm, a 3D printed magazine might serve them well. While not as durable as a factory magazine, printed Glock mags using a $2 magazine spring available from Wilson Combat or plenty of other suppliers and 30 cents worth of plastic have survived tests of over 500 rounds through them before beginning to fail. With the spring re-useable in the next printed mag, a never-ending supply of appropriate capacity magazines is available to the home 3D printer. And before you complain about a lack of aftermarket Glock mag springs in the dystopian future of your choosing, there is also a mandrel or jig, for bending piano wire into a mag spring. Or you can spend $2 apiece now, and stock up.

Okay, now I can hear the questions building up in your heads, so I’ll try and answer them:
Durability “no way am I gonna build a gun outta plastic, that thing’ll blow up in my face!”
The pressure of a round being fired is contained within the upper receiver (using the AR-pattern as an example) and the upper receiver is not, in the eyes of the law, a firearm. Furthermore, AR and Glock pattern printed frames have undergone function testing of several thousand rounds before exhibiting signs of wear that would warrant replacement. That said, all the components that you did not print (the barrel, trigger assembly, pins, buffer, etc) are easily swapped into a newly printed receiver, which cost you about $3 worth of plastic and 24 hours on the printer. Is this as durable as a metal or nylon factory-made receiver? Certainly not. Is it still a remarkable achievement for the individual, non-techie, average citizen at home? You betcha!