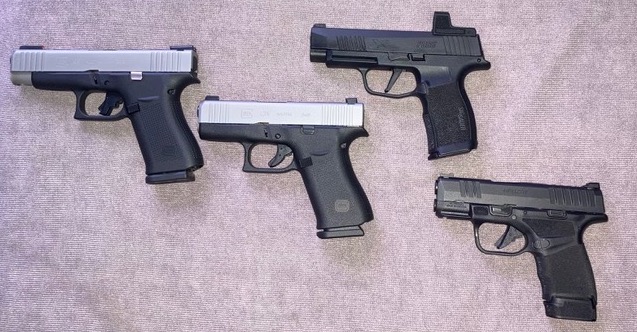 Choosing a handgun is a very personal decision, and I hope that this article will provide information that will help make that decision easier. I want to start by saying that I have been an NRA Certified Firearms Instructor for the last 20 years as well as a part-time law enforcement officer. I have been carrying concealed for close to 30 years, almost all of it with a Glock 19. I have taught more than 2,500 students the course needed in Michigan to obtain a Concealed Pistol License.

Since June 2020, the demand for my concealed carry class has been about 500% of a normal year. The election, pandemic, riots, and a general unease about the future is causing many people to want to purchase and carry a firearm. The majority of these people are females and first-time gun buyers. I urge all my students to put off buying their first gun until after they take the class, because I give them the option of shooting several of my favorite concealed-carry handguns after they complete the formal course of fire. The ones that do buy a gun before the class usually leave saying they wished they would have waited.

I have no association with any product companies that I talk about and purchased all of the guns at retail from a local FFL dealer.

Here are my minimum specifications for a personal protection handgun:

1.) It must have at least a 10-round capacity. This eliminates all revolvers and nearly all of the smaller caliber handguns. The single biggest problem that I see in all my classes is students trying to shoot too small of a gun. I do realize that this is a subjective minimum and that the average defensive shooting is only about three rounds. But I don’t want to plan on average, and 10 rounds or more just makes sense to me.

2.) It must be at least 9mm Parabellum caliber. I personally like the 9mm, as I believe it has the best overall blend of power, capacity, and efficiency. Also, when I attend advanced-level instructor training classes, the vast majority of those instructors carry a 9mm. In police work we would call that “a clue”. The second biggest problem that I see in classes is students shooting a gun with more recoil than they can safely control. This is why many law enforcement agencies have gotten away from the .40 S&W to go back to the 9mm.

3.) It must not have an external safety. I can’t even begin to tell you how many people I see at the range trying to shoot a gun that has the safety on – and that’s in a relatively stress-free environment of a shooting range. Also, external safeties have little pins and springs that can break and malfunction.

4.) It must be able to pass my minimum shooting drill – 5 shots from concealment on an 8” paper plate at 5 yards in less than 3 seconds. Here again, this may be somewhat subjective, but after watching literally thousands of real shootings on video, what I learned was that the “winner” was usually the first person to score an anatomically significant shot on the opponent. By the way, the vast majority of concealed-carry citizens today cannot pass this drill.

5.) I must be able to get my whole hand on the grip – no dangling pinky fingers.

6.) It must exhibit near 100% reliability with common range and self-defense ammunition. My minimum requirement is 200 rounds of range ammo and 50 rounds of my chosen carry ammo without any failures.

7.) It must be easy to conceal by the average shooter.

The top three handguns that meet these requirements are the Glock slimline series (43X and the 48), SIG P365XL, and the Springfield Hellcat. I realize that I may be leaving out your favorite handgun, but this is a list of what I have found that works personally for me as well as the input from many hundreds of students. For those of you who have difficulty racking the slide on some of these smaller guns, you may want to try the Smith & Wesson Shield EZ. I hope all the other gun manufacturers are scrambling to design handguns that are much easier to operate for those with limited hand strength, arthritis, or other disabilities.

My number one choice is the Glock 43X/Glock 48 series. When they first came out, I was not really a fan because they had by far the largest grip and the lowest capacity. The game-changer happened when Shield Arms came out with a 15-round all-steel flush-fit magazine. In my drill the G48 consistently had the lowest times at 2.5 seconds. After watching videos of myself shooting the drill, I attribute the low times to getting a good, fast grip on the gun to get it out of the holster, and the reduced split times due to the higher weight and longer barrel. The 43X is identical to the 48 except for a 1/2” shorter barrel. It was just a tad slower than the 48 due to slightly longer split times. Both of these models are excellent carry guns for most shooters, and it has been the perennial favorite in my classes.

My number two choice for a concealed carry handgun is the SIG P365XL. The standard 365 didn’t make the list (as well as the Glock 43) because it’s just too small for the average shooter to do well with. The XL model I own has the Romeo red dot sight on it, so it did have somewhat of an advantage in the shooting drill. The gun is very well balanced and does just as well at mitigating felt recoil as the G48. Also, the velocity is only about 10 feet per second slower than the 48.

My only real negative on the 365XL is the trigger, and I admit that it is problem for me personally more so than the average shooter because of the extensive time I have with Glock triggers. The flat face and the 90-degree break are different enough for me that it causes me to lose a little speed and accuracy. I am investigating after-market triggers to see if there are any that would be a significant improvement over the “stock” configuration trigger. As an aside, the standard 12-round magazine is very expensive, and the optional 15-round one is almost impossible to find. If you are into mounting lights and lasers, the SIG has a very nice front rail that the Glocks do not have.

My third choice for a concealed-carry handgun would be the Springfield Armory Hellcat. This one made the list but just barely. Its small size made it a little difficult to get a good grip out of the holster, and it was by far the snappiest of the three to shoot. My average drill times were just below the 3-second threshold, and no matter how many times I shot this drill, I could not improve on my times, and I believe it was mostly due to the recoil issues. I should also point out that I need the 13-round extended magazine rather than the standard 11 rounds to meet my no-dangling pinky finger requirement. To me, it’s not a big deal, and I’m amazed that Springfield was able to stuff 13 rounds into such a small package.

The students that liked the Hellcat the best were typically ones with smaller hands. And lastly, the velocity was 70 feet per second less than the Glock 48 for 124FMJ ammo.

Even though I have ranked these three in order, I would feel comfortable carrying any of them. The Glock 19 is still my everyday carry gun – mostly because of my long familiarity with it as well as the fact that I live in the north where we have 9 months of winter and three months of bad sledding, so concealment is really not a problem. I will say that I did carry these three on a regular basis this summer, and the smaller grips, thinner profile, and lighter weights definitely made them easier to conceal in summer attire.

I had mentioned earlier that the biggest problem I see with newly minted concealed-carry holders is shooting a gun that is too small for them. Everyone seems to want to focus on concealability and forgets about the shootability of their chosen handgun. The error that most people make is they want to take their standard attire and add a handgun to it. This is backwards – you first need to decide on the gun and holster you want to use and then dress around it. I have not found a single person yet who has not been able to successfully conceal one of the three handguns I recommended.

When you really do a deep dive into the shootability of smaller handguns than these three, you uncover a whole host of undesirable issues. These include poor grip, improper trigger finger placement, difficulty racking the slide, slow velocity, reduced ammo capacity, short sight radius, higher malfunction rates, and increased recoil. It is important to understand the simple physics of a smaller, lighter gun will have more felt recoil. To me, any one of these would be enough to look at a little bit bigger handgun.

About My Standard Shooting Drill

I also wanted to comment on why I think my standard drill of 5 shots from 5 yards into an 8” paper plate in under 3 seconds is so important. First, more than 90% of all self-defense shootings happen within 5 yards, so this is the distance we need to be very good at.

The 3-second minimum time is somewhat arbitrary. However, the average gunfight is over within 3 seconds. The reason I use 5 shots is twofold: First, handgun rounds are anemic to begin with, so I am probably going to need a bunch of them to stop the threat. Secondly, I have found that you need a really good grip to get off 5 shots as fast as you can pull the trigger. I see lots of malfunctions on this drill because of poor grip. Lastly, an 8” paper plate represents the average size of human vital organs, as an aiming point.

How To Make Your Choice

To recap, here are my recommendations for choosing a personal defense handgun:
1.) Take the time and effort to find the best handgun for you.
2.) Once you have selected your handgun, find the carry method and holster that is right for you.
3.) Pick the clothes that will best allow you to conceal your gun while allowing for fast and consistent draws.
4.) Practice, practice, practice! Dry fire drills will allow you to develop the necessary gun handling skills without even having to go the range and fire a shot.