I recently covered the Taurus G2C in a product review article, and it was an outstanding little gun. Unfortunately, Taurus didn’t manufacture a G2 full-sized version. This has been corrected with the all-new Taurus G3 full-sized pistol, and their new G3C. While these two guns appear to be identical to the G2 with a quick glance at the guns side-by-side. But in fact they are really two different models. They just appear to be similar.

Let’s start way back when – when I was the Investigations Manager for a big private detective agency, back in Chicago, Illinois – I was also the company armorer, maintaining all the revolvers that the uniformed security guards used, that were issued to them by the company. The company’s inventory was mainly Taurus Model 65 .38 Special revolvers, with 4-inch barrels. There were a few S&W revolvers, but those weren’t normally issued to the rank and file. Back then, in the early 1980s, Taurus revolvers weren’t known to be all that durable, and then when issued to security guards, who totally abused those guns – I was kept busy repairing those guns all the time. I kept a good inventory of spare parts on-hand at all times. So, I know the workings of Taurus revolvers very well, and what parts would break, and what wouldn’t break.

Over the years, Taurus has updated and upgraded their entire line of handguns, and I’ll put many (not all) of them up against some of the best in the business. I do have reservations about some of their 1911-style pistols – it just seems to be hit or miss with them. You either get an outstanding 1911 that was actually fitted, or one that was simply assembled. Wish Taurus would get their act together on this grand ol’ pistol, and do them all up “right.”

Let’s take a look at the all-new Taurus G3 full-sized model first. It has a 4-inch barrel, and only weighs in at 24.83 ounces. It has fixed sights, with the usual 3-dot white sights – two in the rear sight and one on the front sight – and to be sure, this ear sight is only adjustable for windage – not elevation. The good news is that, the sights were dead-on at 25-yards – in the past, many of the Taurus polymer-framed handguns I tested had their rear sight shooting too low. Plus, it is my understanding that, you can replace these sights with the same sights used on a GLOCK model 17 or 19 – that’s great news, if you want night sights or just a better sight picture. The slide is made out of carbon steel, with a Tenifer finish on it – and the G3 version comes in various colors – and you can even get a stainless steel slide. The frame is black polymer, and has one of the best “feels” or grip you will find. The slightly aggressive roughness is just the right “grit” for a sure hold under all weather conditions.

We also have three Picatinny-style grooves, for installing a light and/or laser on the dust cover – another night touch. There are indentations on the grip area of the frame, that allows your thumb to rest on them – and they are perfectly placed, for right or left-handed shooters. The trigger guard is squared – I can do without it – but its there if you place your index finger on the front of the trigger guard. The magazine release “appears” to be a little on the small side, however, I never fumbled a reload – always hit the button to release a magazine. We have the slide release/stop on the left side of the frame (only) and behind that is the thumb safety – up for safe, and down for fire.

Now, the trigger is worth mentioning, because it is a nicer trigger pull than that on the G2C model – it is very, very smooth and short. Once you chamber a round, the trigger is ready for single-action work – there is a fairly long take-up, before the trigger makes contact with the inner workings, but once you hit that “sweet” spot, the gun fires with about 4.5-pounds of pull – extremely outstanding if you ask me. Now, if you happen to have a misfire, you don’t have to do the tap-rack-bang routine, you can simply pull the trigger again. This time, the trigger pull is longer but once again, it is very smooth.

There is a blade safety in the middle of the trigger – like so many other polymer-framed handguns have. However, on the G3 models – the G3C as well, the blade is quite a bit wider and grooved – it makes for a nicer trigger pull if you ask me. You have to hold a G3 and G2C model next to one another to see and feel the difference in the two blade safety widths. Above the very front of the trigger guard are two indentations on both sides of the frame – these are properly placed so that when you are resting your trigger finger – off the trigger – your trigger finger rests right in those indentations. The full-sized G3 comes with a 15-round and a 17-round magazine – that is, unless you like in a state that restricts you to only 10 rounds. One tip on ordering magazines from Taurus – don’t! Instead, find them on-line from a retailer. My last order for a magazine directly from Taurus took eight weeks and several e-mails and calls before it arrived.

I covered a lot of the foregoing material before, but just wanted to touch on it once again, before going on to the G3C model. 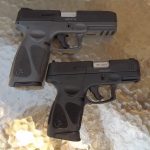 Now, the Taurus G3C is pretty much the same as the full-sized G3, except it is smaller, more compact, and made with concealed carry in mind. The barrel is only 3.20-inches on the G3C, and the gun weighs in at 22-ounces. The magazines hold 12-rounds, unless, once again, you live in a state that restricts you to only 10-rounds. There is also a single Picatinny rail groove on the dust cover – and many compact handguns don’t even have a Picatinny rail at all. Now, one thing worth mentioning is that Taurus did away with their mechanical loaded chamber indicator – a “flag” if you will, that stood up slightly on the top of the slide, behind the chamber – it is was “up” you could see or feel it – however, many shooters found it distracting when it was up. So, Taurus simply has a loaded chamber viewing hole now in the rear of the barrel chamber. Only thing is, without a lot of light, you can’t see if there is any brass in the chamber or not. Still, it is there, as required by some states that demand this feature on any pistols sold in their state.

I wanted to focus on the G3C version – since I already covered the G3 before – once again, they appear to be very similar pistols, but there are some differences. I already said I’d carry the G3 to war with me – not a problem at all. However, the G3C is meant for concealed carry, and there are a few different things between the two guns. The rear sight on the G3C is all black, it doesn’t have two white dots like the full-sized G3 has – and the back side of the rear sight has grooves, to cut down reflection from the sun if it is behind you when you’re shooting. I didn’t think I was going to like this new rear sight in the least, since my aged eyes really can see the white dots a lot better than all-black sights. However, this new rear sight really draws your eye to the front sight – and you should concentrate on the front sight when you are aiming…and this new rear sight allows just that.

The slide configuration is different on the G3C than that on the G2C model, the G2C has a different shape on the front of it – the top, to be exact, and it is milled making the slide a bit trimmer at the front end. The G3C doesn’t have this, but it does have three grooves on either side at the front, if you want to press-check to see if there is a round in the chamber.

Now, to the trigger pull: It isn’t nearly as nice as that found on the G3 full-sized model. It is still fairly smooth, but a bit heavier – almost a little bit gritty – but not bad – hard to explain, but you can feel the difference between the two guns. BTW, both the G3 and G3C have long, and heavy-duty extractors – so no worries about them breaking – they’ll pull out the most stubborn empty brass.

When it came time to do some shooting, I restricted my shooting to the G3C since I had already tested the G3 in another article. I feared that the slightly heavier/different trigger pull would be a hindrance to my shooting, but it wasn’t. I had the following ammo on-hand, from Black Hills Ammunition 115-gr JHP +P, 124-gr JHP +P, 115-gr FMJ, 100-gr HoneyBadger +P all copper fluted bullets, and their 115-gr EXP HP (Extra Power) round. All shooting was actually done at 25-yards – I wanted to see how this little gun would do at that distance. There were zero malfunctions in more than 250 rounds fired – I’m not firing as much ammo in my tests because of the ammo drought these days. I rested the gun over a rolled-up sleeping bag over the hood of my pick-up. All ammo was well under 4-inch groups, with the 115-gr EXP HP being the stand out – with some groups hovering at 3.25-inches if I did my part. That is outstanding for a little concealed carry 9mm pistol – really outstanding.

The G3C retails for $305 but shop around. I got mine for $240 and it was a steal of a deal…I have no plans on getting rid of my “older” G2C model, now that I have a G3C – the older guns is a reliable shooter. I suspect that, in due time, Taurus will discontinue the G2C so look for deals on them. If you’re in the market for a nice little concealed carry 9mm pistol, you could do a lot worse than the all-new Taurus G3C model. However, I wouldn’t pass up a deal on the G2C if I found one – both are outstanding shooters…and the G3 full-sized model is great for survival or even duty carry. Check them out and make a decision – however, you might just buy the G3 and a G3C once you’ve handled them both.