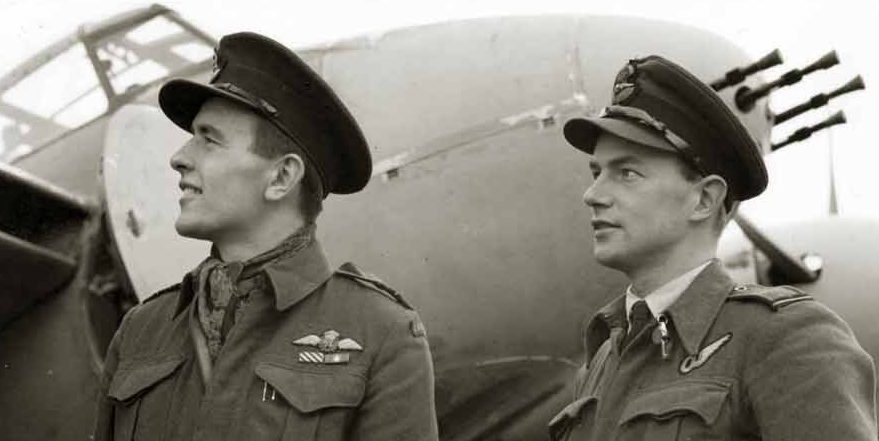 After entering the Royal Canadian Air Force (RCAF), Bannock received his pilot’s wings in 1940 and was appointed as an instructor at Trenton, Ontario. Later he was posted to Royal Air Force Ferry Command from June to August 1942. In September 1942, Bannock became chief instructor with the Flying Instructor School at Arnprior in Ontario. Bannock’s request for overseas service was granted in 1944 and he joined 60 OTU based in RAF High Ercall, England.

In June 1944, Bannock was then transferred to No. 418 Squadron RCAF, flying intruder missions over Europe with the de Havilland Mosquito Mk. VI fighter-bomber. He quickly proved adept at this type of operation and achieved his first victories. In October 1944, he was promoted to Wing Commander and took command of the squadron. Bannock also flew ‘Diver’ operations against the German V-1 “flying bombs” launched against London and southern England. On one mission he shot down four V-1s in one hour. A bar to his Distinguished Flying Cross (DFC) was added for his missions against the V-1s.

Bannock was transferred to No. 406 Squadron RCAF in November 1944 as commanding officer, and was awarded the Distinguished Service Order (DSO). By April 1945, Bannock had destroyed 11 enemy aircraft (including 2 on the ground), 4 damaged in the air and 19.5 V-1s destroyed. Bannock became Director of Operations, RCAF Overseas Headquarters, in London in May 1945 until September 1945 when he attended the Royal Air Force Staff College. Retiring from the RCAF in 1946, Bannock joined the de Havilland Canada Aircraft Company as chief test pilot, flying prototypes like the Beaver and various short take-off and landing aircraft. In 1950 Bannock became Director of Military Sales and later Vice President and President from 1976 to 1978. In 1968 he formed his own consulting business, Bannock Aerospace Ltd.

November 1st, 1923 was the birthday of science fiction writer Gordon R. Dickson (born 1923, died January 31, 2001). Many of his novels and short stories, such as Wolf and Iron, have survivalist themes.

I just heard that actor Sean Connery passed away, at 90 years of age. He was quite a guy. Most folks remember him as James Bond, but I most enjoyed his role in The Man Who Would Be King, and his Oscar-winning role in The Untouchables.  I loved that “The Chicago Way” speech.

Today we present the monthly precious metals market analysis, written by Steven Cochran of Gainesville Coins.  I may not have pointed this out before, but I can vouch that is a firm with a solid reputation for customer service, prompt shipments, and competitive pricing. I recommend them.