To start out this review of the Glock 43X, let me first mention another Glock pistol: I love my Glock 26, and it is my usual everyday carry piece, with a spare magazine on the opposite hip. About the only time I’m not carrying my Glock 26, is when I’m testing other handguns for articles. However, I always switch back to my 26, at the end of my testing period – it just seems to fit me perfectly. The 26 came with several 10-round magazines, and they have a flat base on them. I don’t care for that, because it allows my pinky finger to dangle under the grip of the gun. For years, most folks added a Pearce Grip “pinky catcher” to the mags – just remove the factory mag bottom and replace it with the Pearce. It made a world of difference in the way the gun felt and shot. Now, you can get extended Pearce mag bottoms, that hold one, two or even three more 9mm rounds in the factory standard 10-round magazines – outstanding.

On my Glock 26, I only have a Plus One Pearce mag bottom on it – it helps with concealment a little better, than the two or three round bases do. So, my 26 has 11-rounds in the magazine, and one in the chamber – that gives me 12-rounds on-tap. On my off-side, I have a MagPul-made Glock 12-round mag for a speedy reload. I like the MagPul mags a lot. However, for the mag in my gun, I prefer the Glock factory mag for some reason. Still, I’ve never had any problems at all with the MagPul 12-round Glock 26 mags. Take it for what its worth.

When the Glock 26 first came out, around 1992, I worked for the late Colonel Rex Applegate, and we were doing the very first video for Paladin Press and we had the one and only prototype Glock 26 on-hand for use in the video. Shortly after that, Glock released the Glock 26, and many gun writers were calling int the “pocket rocket” for some reason. To my way of thinking, it was too big to carry in my pants pocket – still think its too big. However, it took off – maybe like a “rocket” back then, and it is still one of the best-selling Glocks on the market.

The Glock 26 is still a little bit “chunky” for some – and it is, to my mind, but I still love it. I do like how easily it conceals on my right hip, in an outside the waistband holster – on my belt. It is very concealable. Now enter the fairly new Glock 43X. This is one hot-seller for Glock right now – hard to come by. I had a Model 43, but it was just too small for me, so I traded it off, in short order. The Model 43X is slightly bigger, holding 10+1 rounds in a single stack magazine – the Model 26 is a double-stack magazine, so it is thicker in the body – making it a little too thick for some users. The 43X is an entirely different horse, to be sure, It actually feels thinner than it is – Glock says it is 0.87-inches wide – that’s very thin. Still, it feels great in my hand, and everyone who has handled it said the same thing.

Let’s look at the specs on the 43X model: It has a barrel that is 3.41-inches long, and the overall length of the slide is 6.50-inches – plenty small enough for easy concealment. As already mentioned, it takes a single-stack 10-round mag, and it comes with two of them – they are inexpensive enough to purchase several more – and can be found all over the ‘net for about $20 each. The gun is 5.4-inches tall.

On the slide we have the usual Glock plastic sights, the front is a large white dot, and the rear has the almost “U” shaped white outline. These are considered “basic” sights, but still very fast for combat work. The little 43X is 16.40-ounces empty, without the magazine inserted, and 18.7-ounces with tand empy magazine. And loaded it is about 23-ounces – depending on the bullet weight of the 9mm rounds you stuff into it. Trigger pull is 5.5-pounds, like most other Glocks. Glock says that all their firearms are Double Action Only, but most users will disagree, and say it is Single Action – you be the judge – I think it is more Single Action than Double Action. It has no restrike capabilities if the gun fails to fire. You have to rack the slide to remove the dud round and chamber another round – a very fast thing to do.

For a size comparison, I stacked the Model 43X on top of my Glock 26, and they are very close in appearance – in size.  (See the photo–the Model 26 is the Flat Dark Earth color gun, beneath.) However, they are much different when you hold them in your hand – again, the 26 is a little chunky and the 43X is very thin – the pictures don’t do justice to the size differences – you’ll have to trust me on this, or compare them at your local gun shop. The 43X is really a lot smaller all the way around.

I carried the little 43X in two different holsters during my testing, one is a (hard) polymer affair from Bravo Concealment and the other from Craft Holsters that rode nicely on my hip. I preferred it over the polymer holster. I’m a real sucker for a well-made leather holster on my hip. The Craft Leather holster also held the gun closer and tighter to my side and the draw was quicker as well, compared to the polymer holster. You really need to check out Craft Holsters, you get a lot for your money, and they are extremely well-made.

The spare mag came with the Bravo Concealment holster, and was most welcome with the set-up. Now, to be sure, you should never carry any striker-fired handgun in your pants, or purse, without it being in a holster – you are only inviting a negligent discharge (ND) by doing that. Many people still won’t listen – until they had an ND and if they are lucky, they won’t shoot a vital part of their body, or someone else. And, you should always carry any semiauto handgun or revolver, fully loaded, and that means a round in the chamber of a semiauto.

Because of this virus we still have going around, I didn’t have any volunteer shooters, except for my wife. She loved the way the 43X felt in her hand, but when it came to shooting it, she said it “hurt” a little compared to her Glock 19. Well, the 43X is much thinner in the grip area, so the felt recoil will feel like it is “hurting” a little bit more. Still, she was a trooper and shot it – with her shooting gloves on. We went through more than 300 rounds of ammo, with zero malfunctions of any kind. The only “problem” I experienced was dropping the slide once it locked back on an empty magazine – using the slide lock – it was very stiff to press down. I rarely use the slide stop on any handguns, and prefer to draw the slide back and release it to chamber a round. That was the way I was trained, many years ago. So this wasn’t a real problem getting another round in the chamber once you inserted another loaded magazine.

From Black Hills Ammunition, I had the following ammo on-hand for testing. 115-gr JHP +P 115-gr FMJ, 124-gr JHP, 115-gr Barnes Tax XP +P and their outstanding 100-gr HoneyBadger all-copper fluted bullet. I’ve mentioned this before, but it is worth mentioning again: Some guns just seem to run “smoother” with one type of ammo or bullet over another, and this little 43X loved the 115-gr JHP +P load. Now, while this gun is rated to handle +P ammo, I wouldn’t feed it a steady diet of this hotter ammo – just to be safe. However, I could “feel” the difference when shooting this 115-gr JHP +P load – the slide was just cycling smoother to my way of thinking. Plus, this would be a great self-defense load, as well.

I was “killing” all manner of rocks and tree branches on the ground with regularity, never missing them – even at long distances. Once again, the gun never missed a beat, just kept going and going. For my accuracy testing, I set the target out to only 15-yards, since the barrel is shorter than on a mid or full-sized Glock. I had to really hunker down, and get a good grip on this little 43X if I expected to wring out the best accuracy that I could. I didn’t want the gun twisting or turning in my hand under recoil – not that there is much recoil in a 9mm round to start with. 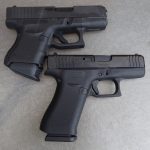 The gun was fired over a padded rest, on top of a big boulder, again at 15 yards. The gun was plenty accurate, with most groups under 3-inches without much trouble. Some groups were hovering around 2.5-inches if I concentrated on what I was doing. The best accuracy results came from the 115-gr FMJ load – and it was consistently right at 2.5-inches all the time. If I was doing everything right, I could do that all the time. But the 115-gr FMJ load was easy enough to keep in that 2.5-inch range – can’t ask for much better than that – for a very compact 9mm, 10-shot or 11-shot handgun.

I’m not ready to retire my Glock 26, and replace it with the 43X, but I’m now thinking really hard about it. I will need to shoot the 43X a little more and test-carry it a little more, but I’m leaning towards retiring the Model 26 and replacing it with the 43X. It is that nice of a concealed carry handgun. Check one out – if you can even find one – they are hard to find in captivity.