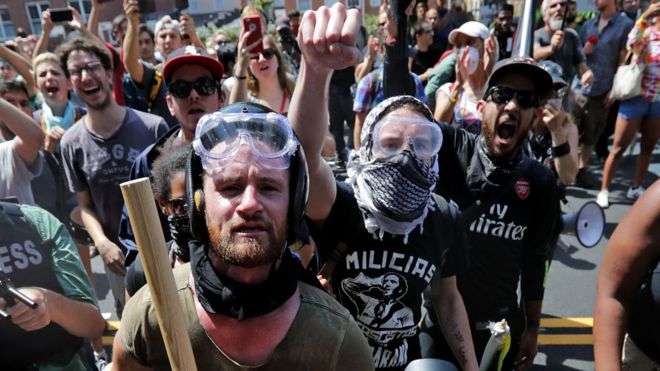 We Have a major problem, and it isn’t going to just away.

As I write this, we have multiple people shot in Kenosha, 80+ days of rioting in Portland, and the large major cities are powderkegs waiting to blow. Lack of leadership from city and state leaders nationwide has exacerbated the problem greatly while blaming everyone but those responsible for those places and people. I look at this from the standpoint of an amateur historian, and I see this getting far worse before or if it gets better, with winter coming, riots, Covid and all its ramifications, things are going to get a lot worse, and not just for the short term. We have a major problem, and it isn’t going to just go away.

If all those issues went away today, the magic wand is waved, and we go back to “normal” then we still have a serious problem. That problem is a clear, vocal, and violent movement that has emerged from the shadows and its limited visibility (Portland) to this date to national prominence. I do not want to use their name specifically because these are a group of groups, but their overall movement and goal is what I will refer to.

I will refer to them as Revolutionaries or Revs.

These Revs who today burn businesses and homes, assault and murder people in the streets. are identical to those Revs from the 1960s and 1970s who prepared the ground for this when they left the streets protesting Vietnam and became the politicians and executives who created the welfare state, education system, political correctness society which is directly responsible for the situation as it stands today. Those revolutionaries are now the generation who themselves or their direct lineage tell police nationwide to stand down, prosecutors who release violent criminals onto the streets, and support the violent riots vailed by their allies in the media under the omnipresent narrative of “peaceful protesters”.

This raises a question, if the generation that created the environment and fostered it was bad, and was slowly eroding of liberty, then what will happen to that scrap of freedom we have left when this entitled, vocal, irrational, emotion-driven, and violent generation or revolutionaries grows to our next generation of teachers, politicians, and executives?

Sadly, I think that answer is obvious to any free-thinking liberty-minded person with just a passing knowledge of history: Totalitarianism.

In what form is hard to say, but totalitarianism is the clear direction, if not sooner it will be later. Pessimistic as it may sound, to ignore the likely nature of what is currently happening would be foolish and dangerous for you or your family. Yes, food is still getting to the grocery stores, although you need to wear a mask now and social distance, but food still shows up nonetheless. The water runs, the toilet still flushes, gas is available at the pump, and the lights are still on. Other than some spots here or their nationwide things are okay for the most part away from the hotspots. Most people hope the problem just goes away or stays over there if you will, but this problem is now truly here to stay and growing. Our comfortable life now likely has a shelf life, depending on where you reside.

The people taking these revolutionary steps aren’t new, just far more vocal and violent now because they feel emboldened by sympathetic politicians, media, professors, and other revs. These same groups have been active on University campuses nationwide for years, most reading this will be aware of this. These groups have no problem with just taking property, making you conform, flat out kneel, or sometimes at the cost of your life. When they get into power positions, they will use that power to force their beliefs and mandates as so many do, today with Molotov’s and clubs tomorrow they will use the force of arms and law. Like the generation of “Love” who began the erosion of our liberties once put in positions of power, this generation who already has a sense of entitlement will just take those liberties, minus the erosion or incrementalism of previous generations, this one will just take your liberties and is willing to kill to do it.

We are arguably living in the most dangerous time in American history, even in the civil war there was a sense of civility and commonality. Today that does not exist. The revs of today have no civility and commonality (commonality referring to common shared history and experience as with rural or some suburban people) and have no issue attacking anyone and anything they feel they want to in the pursuit of their goals, and again are willing to kill you and your family for it. The divide of urban (government/system dependent) and rural (independently-minded/self-sufficient) is growing ever wider with every passing day and looks as if it’s possibly irreconcilable.

We have a lost generation of Americans and now have dependent minded Americans who someday will be in positions of power able to enact their desires and frankly take your liberty and property.

So, what can we do as liberty-loving independent Americans?

Long term liberty-minded people must consider all options looking at where we are today, what we face in the future, and the stability of your situation in those circumstances. Long term, the large cities will likely continue to devolve into violence and lawlessness. They are untenable without a great awakening that those in charge of those cities will never allow happening. The issue here is that the interests of those large cities due to population density will override the interests of those outside of the cities and will impose their will upon those people in their states. This will create the most fundamental issues/questions and your position in it:

Looking at those questions, envisioning your current position in it, and looking forward to the likely outcome of this in a logical, stark, and realistic way without blinders or prejudice could be the best thing you ever do for yourself and your family.

A Return to Normality?

I believe that things will never go back to “normal”.

With the current state of education, government, media, and lack of spiritualism it is very unlikely there will be a great awakening and return to constitutional government, that leaves 2 options remaining from that list. Those likely to read this will find option 1 unacceptable under any circumstances as this writer does. That leaves rise, or separate. Obviously, violence is a last resort for self-defense, defense of family, and defense of property. But it is our God-given right to self-defense. That leaves separate, a nonviolent at first physical separation from those places is necessary, the consideration of political separation may become necessary. Of course, political separation is the last option but may become the only recourse to save our constitutional government.

The future is unclear, but the general direction is clear. Those in the streets will someday be in positions of power, and the places they attain that power will be totalitarian nightmares. Nationally they will be in positions to enact their agenda or will just take power as so many have throughout history.

Today is the day to consider your position in all aspects of your life, are you where you and your family have the best chance for safety, security, and prosperity.

You may not get a chance in the future to even consider these things ladies and gentlemen, I contend we have a major problem, and it isn’t going to just away.

I’m not a writer as seen from above, I’m just concerned about my son’s future, and I see the direction, it scares me. Thanks for reading.