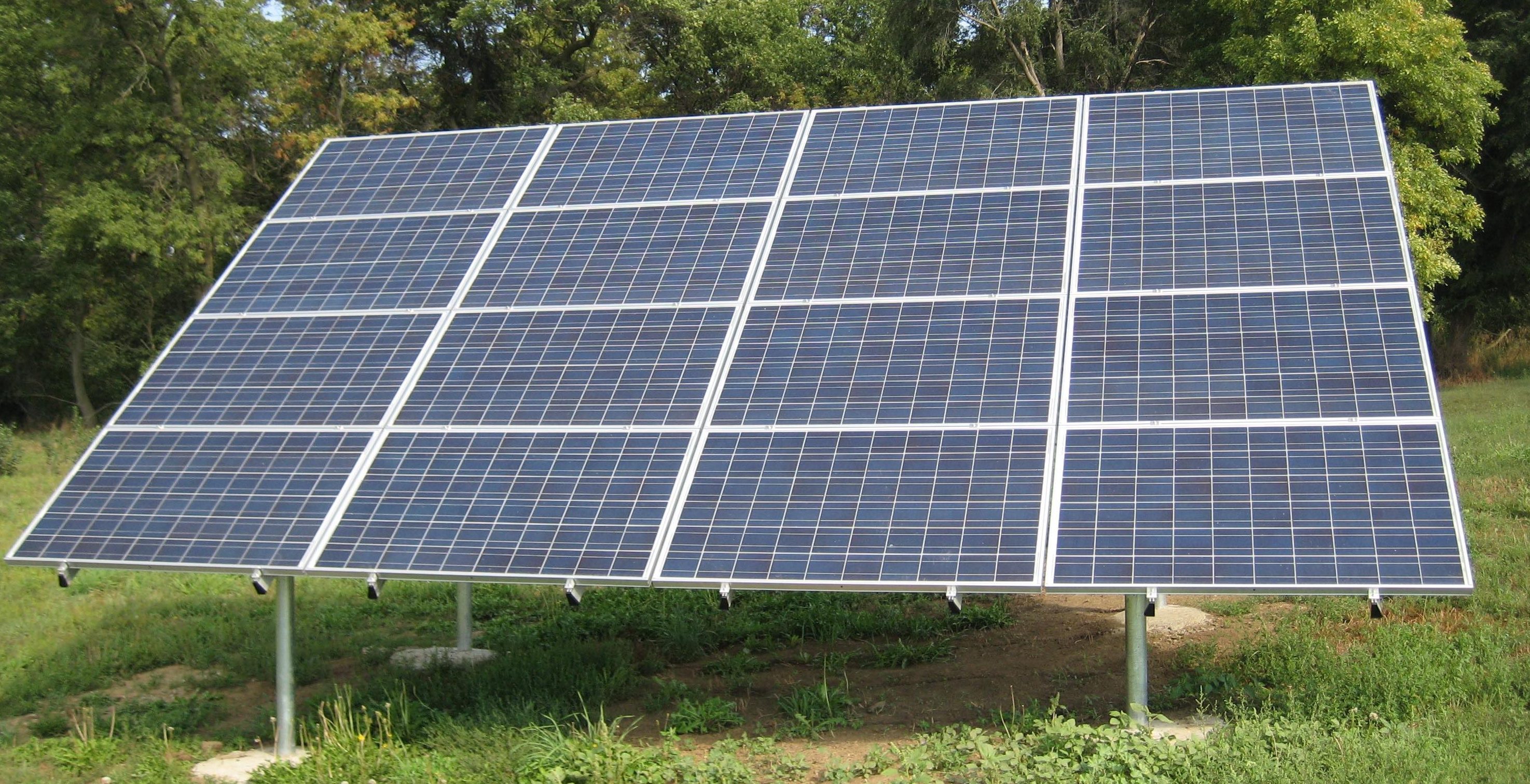 Solar power from photovoltaic (PV) cells is an inexpensive, plentiful source of versatile energy for off-grid locations. This piece is not intended to be a comprehensive treatise on solar power design – there are many excellent books on the subject. Rather, this is a discussion specializing on considerations for solar power in a bug out location (BOL) or homestead, especially with some thoughts toward going forward after a grid-down event. It also describes some tips on what I have found works the best at my BOL.

The higher voltage used, the more potential power you have for a given battery capacity and wire size. However, in a BOL, an important consideration is how versatile the system is when you consider what you are going to run. While 12 Volt DC requires the biggest gauge wiring and has the potential for the most energy loss in the wiring, I feel that it is more than made up for by the variety of things you can run on it. Nearly every cordless tool you get now can be had with a vehicular charger, and so can also be charged off a 12V solar system. 12V LED bulbs are ubiquitous, both in automotive applications and in standard Edison screw base bulbs for house lighting – 12V Edison base LED bulbs are even stocked at many home improvement stores now, albeit at a much higher price than you can get them for on-line.

DC well pumps, on the other hand, require higher voltages due to the amount of power required, and the length of wire necessary to go down the well to the pump. If you are considering a DC well pump, you will probably have to go with a system voltage higher than 12V. I have a gravity-fed rainwater system that I described in an earlier article for my water needs, so my well pump is strictly for backup.

And while we’re on the system voltage discussion, the next thing to consider is controller type and panel voltage.

Solar power system design, up until recently, typically had solar panel voltage closely matched to battery voltage. Now, the latest and greatest technique is to use a Maximum Power Point Tracking (MPPT) controller, which efficiently reduces the panel voltage to your system voltage, and use solar panel voltages much higher than your battery and system distribution voltage, with consequently less current for the same amount of power. This has the advantage of minimizing the incoming wire diameter required and the energy loss in the wiring between your solar panels and the controller.

However, the Achilles’ heel in this is the possibility of the controller failing, either on its own or from an EMP event. With the old-style system, matching panel voltage more closely to system voltage, you can bypass the controller and directly charge the batteries from the panels, with the batteries themselves acting to regulate the system voltage. You have to watch things closely, to make sure the batteries are not overcharged in bright sunlight – but it will work, thus giving you a plan B in case of controller failure. Keeping with the prepper mantra of ‘two is one and one is none’, with the knowledge that I may have to keep this system running for many years without replacement parts, I went with the conventional non-MPPT design.

Most controllers also can act as a load controller, and have an output that is shut off when the system voltage drops below a predetermined threshold, usually around 11.0V. I would suggest using that to power loads that are less critical (I have my refrigerator powered by that output), and have at least some of your lights powered directly from the battery, so even if the battery bank gets severely run down, you can still see to arrange some backup power, or to make emergency arrangements. My system has two fuse blocks for load distribution, one direct from the battery for critical lighting loads, and one that is switched through the load controller for less critical loads like refrigerator, battery charging for my radio desk, trickle charging the generator battery, etc.

My solar system is four 120 watt panels, and two older, smaller ones of 100W and 80W, for a total of 660 watts total capacity – but as you can see in the picture, not all of them are oriented to simultaneously output the maximum. Four panels are set facing South and produce the bulk of the system output, one is faced East to catch early morning sun, and one is faced West to catch the last sun in the evening. Since solar panels only output during daylight, maximizing the number of hours you can get output from them, and minimizing the hours that you are going to have to rely on your batteries alone, is very important. This becomes even more critical when you are running refrigeration twenty-four hours a day with your system, and have a significant load on it overnight.

The change in the angle of the Sun’s rays reaching the earth over the course of a year is very significant. Solar panels need to be inclined much more in the winter than in the summer, when the sun is lower in the sky, to make the most output. One useful web site will show you your optimum inclination angle for your particular location. Scroll partway down the page and you will find the “Solar Angle Calculator” where you will input your country, state, and city to find the optimum inclination angle for each month.

For the East and Western-facing panels, they will need to be oriented straight East and West during the summer months, and more Southeast and Southwest during the fall and winter months. These can be set at a much higher angle than the South facing panels, as the angle of the sun will be lower in the sky when these panels come into play. The best option here is to go out there at sunrise and sunset times and observe what azimuth they need to face, and what angle, so that the sun falls as perpendicularly on them as possible for highest output. If there are any trees or other obstructions in the area where your panels are, also observe to see any shadows thrown by those obstructions, and place your panels to avoid the shade created by those objects as much as possible. This will of course change during the year as the angle of the sun changes.

Sophisticated systems are available that move the panels to follow the sun during the course of a day. These systems are complex and expensive for the results that they give. For that reason, and the likelihood of failure, both mechanically (from the motors and actuators wearing out) and electrically (an EMP taking out the controller), I decided to go with a simple brute-force system that fixed the orientation of the panels to the South sky (and one each to the East and West), and manually adjust the inclination four times a year, as described.

Panel cleanliness is often ignored. A slight film of dust or dirt on the panels will result in a significant loss of output. A combination sponge and squeegee, like is used for cleaning windshields at a filling station, makes cleaning the panels a lot easier. Likewise, in the winter, a standard windshield ice scraper and brush makes a convenient tool to clean ice and snow off of them.

Golf cart batteries are designed for deep cycle service and are ideal for solar power systems. There is some concern about battery life, but I have one set that I have been using for over ten years that still tests fine. Maintenance is important. Most of the charge controllers I have seen charge the batteries to a much higher voltage than is required (14.4V versus 13.5V), with a lot of water evaporated away from the cells as a result. Check the water levels in the cells at least once a month, particularly in the summertime when it is hot. Add distilled or clean rainwater as necessary to bring the level up to the split ring.

My 12-Volt system has groups of two six-volt golf cart batteries in series for twelve volts. In addition, I have one twelve volt marine deep cycle battery that I have tied to the system with an Anderson power pole connector so I can easily disconnect it for portable use. I have a twelve-volt Minibrute chain saw that I power it from, and it also gives me a portable high-current source to jump-start vehicles, etc. A conventional ‘jump pack’ would be a good alternative here, with its portability, but make sure it has a deep-cycle rated battery in it to withstand deep discharges.

If your system has more than one set of batteries, it is a good idea to have a high-current switch in series with each set so you can isolate them for maintenance and testing. Simple high-current switches that mount on the battery posts, designed for use in vehicles as a main switch to disable the vehicle when they are opened, are commonly and inexpensively available at auto parts stores.