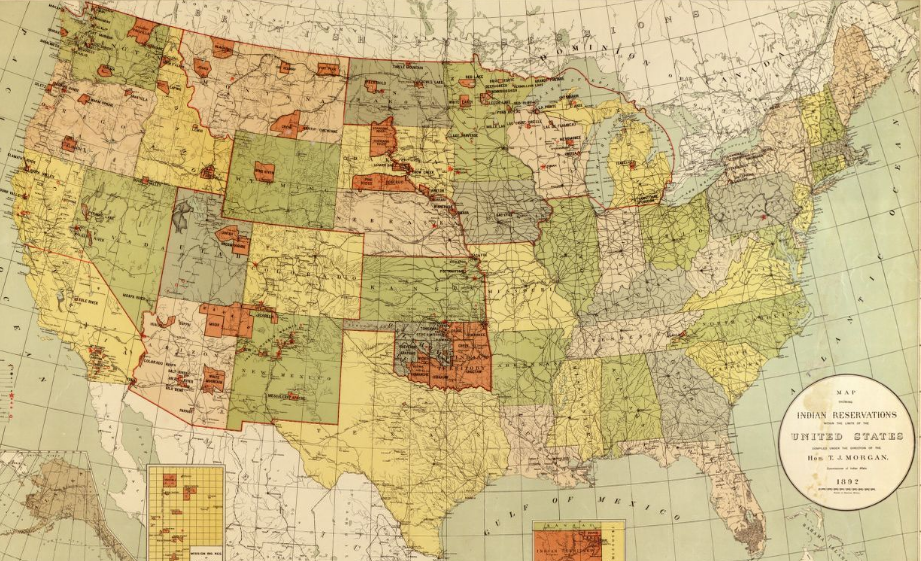 Most SurvivalBlog readers have seen news and commentary pieces like this one, inked over at the Whatfinger.com aggregation site: Supreme Court Just Gave Back Half Of Oklahoma To Native Americans, Leftist Judges Uphold 1866 Treaty.

The ramifications of the recent McGirt v. Oklahoma decision are huge. I predict that this court ruling will be a key precedent and have some far-reaching Implications. It may even open the door for the Balkanization of the United States. This case sets a key precedent. Folks living on land that was formerly part of a reservation should particularly take note. Many reservations have had their boundaries truncated, over the years–and many of those boundary line changes were made at the state and federal level in abrogation of original treaty terms.  That was the crux of the McGirt decision.

In the 21st Century it is difficult for most Americans to recollect the broad expanses of land that were once inside of tribal boundaries. Most of these lands were expropriated more than a century ago, long before most of us were born. Here is just one example: The Nez Perce Tribe’s original and later tribal reservation boundaries. If subsequent court cases that rely on the McGirt case as a precedent side with the tribes, then a lot of land area may end up back inside of new, much larger reservation boundaries. Here a link to a zoomable map to study. It was drawn circa 1892. (This map is also shown in low resolution at the top of this article.)

Take a close look at the zoomable map that Tim Pool referenced. That map shows not just reservation boundaries but also “traditional” tribal land areas–some of which overlap. With those boundaries in mind, the McGirt ruling could have ramifications in just about every state in the Union except for within the original 13 colony states. As western expansion continued, America’s aboriginal tribes were progressively pushed “out of sight, and out of mind.” The Trail of Tears experience–with forced relocation of tribes to Oklahoma and then the subsequent Cherokee Strip land rush debacle–are black marks on American history. And the case might even have a secondary effect in places where no treaty was ever in force, but where “traditional tribal lands” have been identified. For example in Florida, the Seminole tribe refused to enter into a treaty with the United States government. If the courts are sympathetic, then they might be seen as holding antecedent rights not protected by a treaty, but rights, nonetheless.

The McGirt decision might have both positive and negative effects. It might open the floodgates of Balkanization.  Notably, this July, 2020 Supreme Court decision came at an interesting time. Congress is about to take up the issue of statehood for the District of Columbia.  And here in the west, the Liberty State movement, the Greater Idaho campaign, and the State of Jefferson movement are all waiting in the wings. Those are more likely to takes years, if not decades to come to fruition.   But as Tim Pool pointed out, the McGirt decision might have a more immediate effect — in shifting the vote in the 2020 presidential election.

People who already live within the boundaries of a modern reservation can appreciate the significance of living under an additional layer of jurisdiction. This already affects things like water rights, fishing licenses, and even speeding tickets. (Yes, tribal police can issue citations to non-Indians.) But the numbers of non-Indians that will come into nexus with tribal jurisdiction will dramatically increase, with the precedent set by McGirt v. Oklahoma.   There will almost surely be dozens of cases bought forward all over the country, echoing and citing McGirt.

One key aspect of McGirt is that it depending on your ancestery it might not mean adding a layer fo jurisdiction but rather substituting a jurisdiction.  Thus, if your deeded land ends up inside of a newly expanded reservation boundary, then you could conceivably shift from “County, State, and Federal” to instead “County, Tribal, and Federal” jurisdictions. Thus, you might lose some state constitutional protections. Further complicating this is the whole issue of Indian Ancestry and Tribal Enrollment. Some laws might only apply to individuals who are tribally enrolled. Ironically, because of the effect of Tribal Casino money, some tribes are now smaller than they were 40 years ago. (To keep the casino money “in the family”, some tribes have instituted strict modern-day Blood Quantum rules that would make a county judge in Mississippi circa 1920 blush.)

Some people might immediately jump to the conclusion that the McGirt decision will lead to the expropriation of land owned by non-Indians inside of shifted tribal boundaries. I really doubt that we will see that happen. But we could see some muscle-flexing by the tribes, particularly regarding other property rights such as water rights and mineral rights. And in a few years, there may also be some tax revenue issues that come to the fore. Take heed, dear readers: Whenever there is a foundational question regarding government, at any level, at the core it is always about two things: who gets control, and who gets revenue.

All-in-all, I believe that the effects of the McGirt v. Oklahoma decision will be positive. If nothing else, it will get people to look differently at the issues of territorial jurisdiction, in personam jurisdiction, and state sovereignty. It can only be when people no longer take for granted “the way things have always been” that they will begin to look differently at re-partitioning state lines to better reflect the current clash of cultures between urban and rural Americans. For that, we’ll be thankful. – JWR